For U.S. Military in Alaska, a Visit from the USO Brings a Sense of Home

By By Catherine Moore 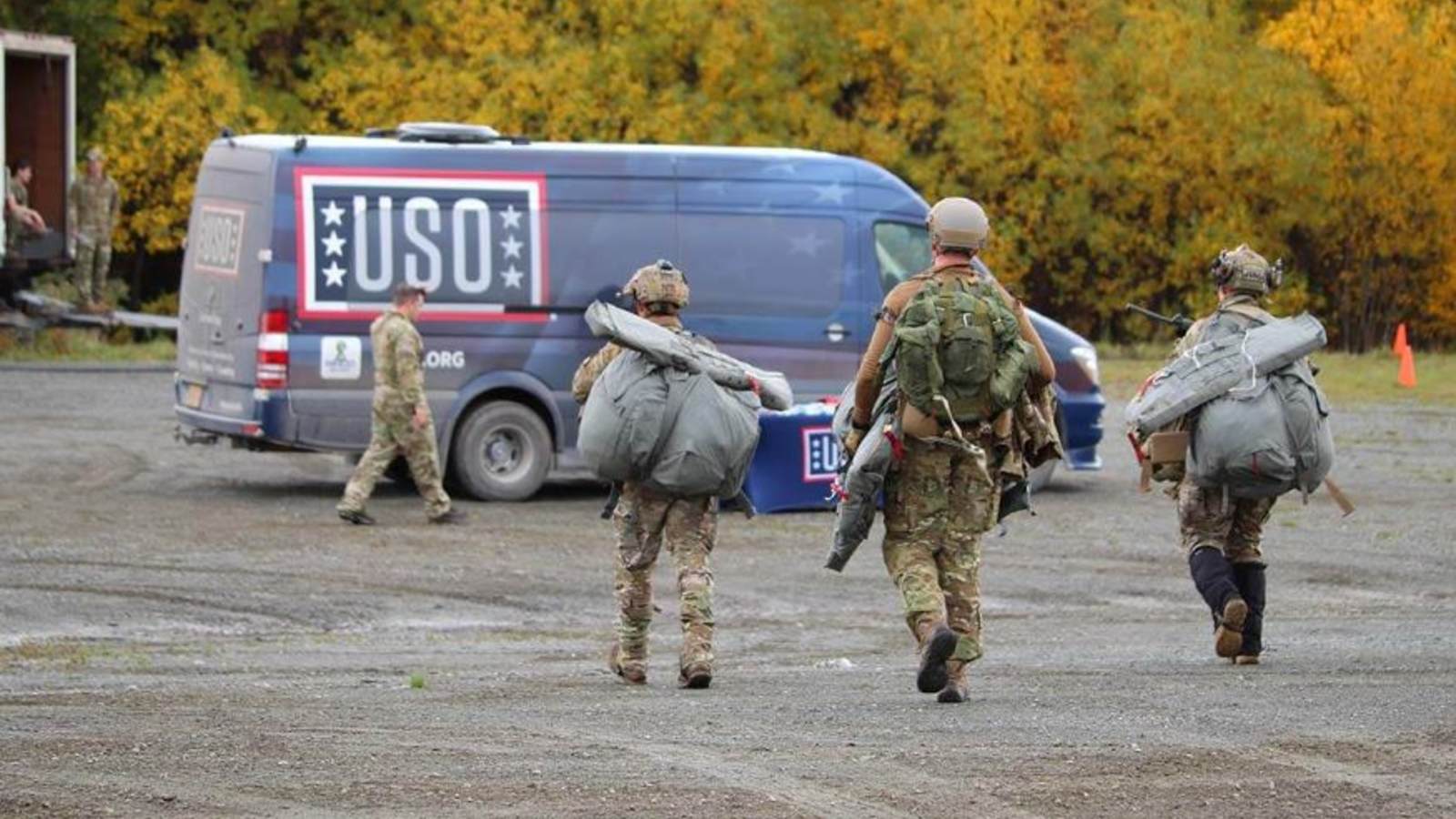 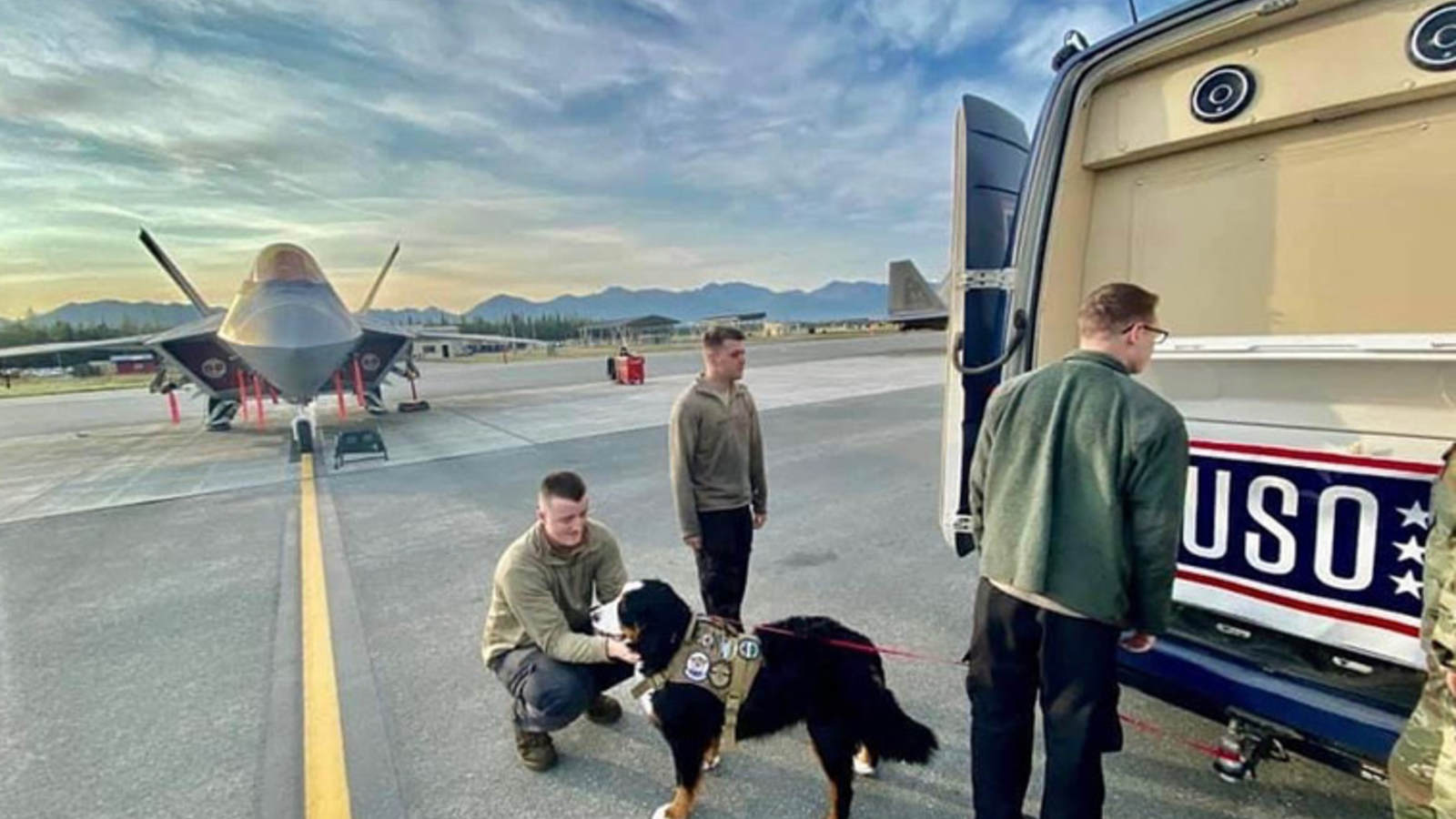 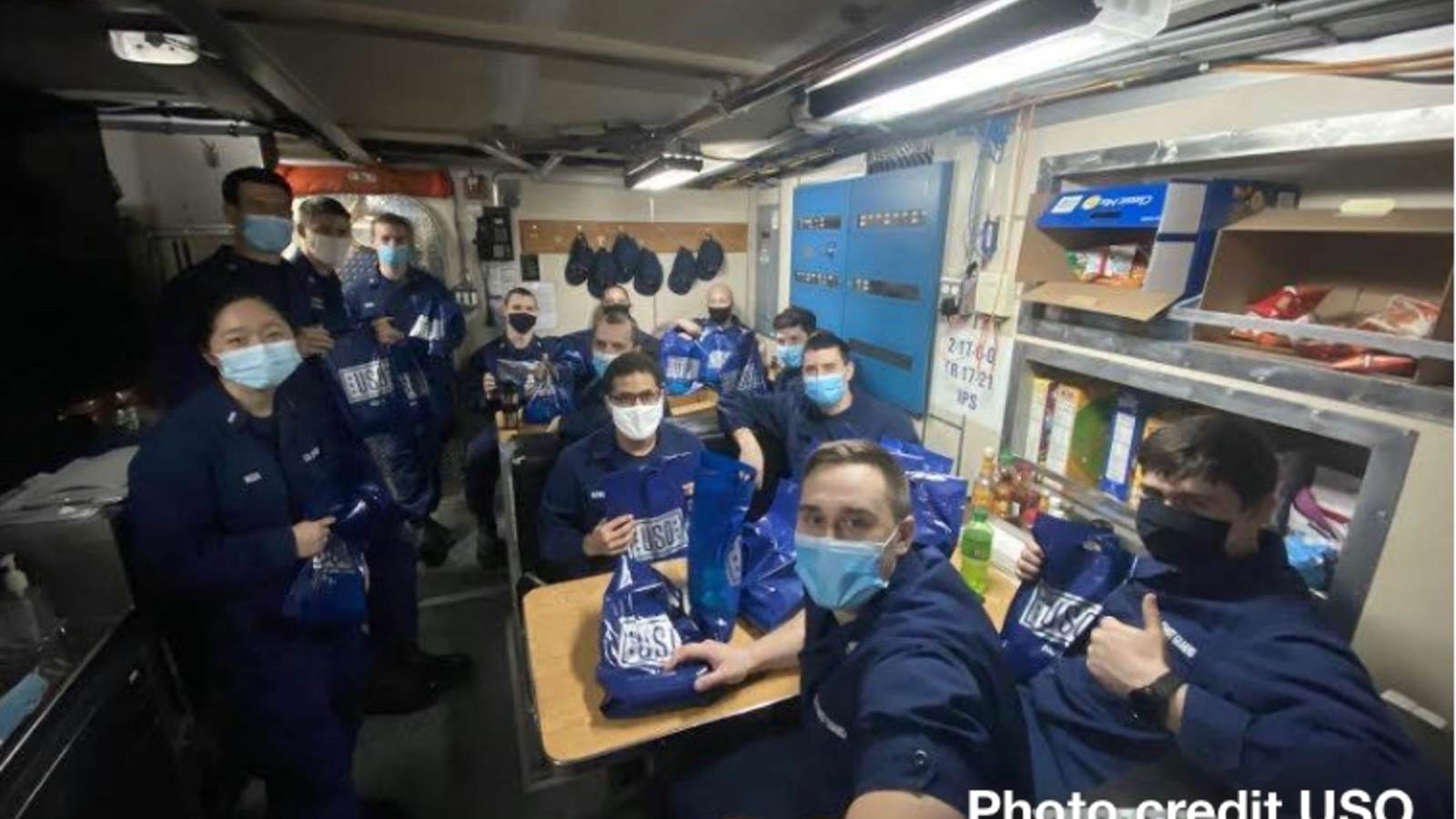 The USO team drops off goodie bags to USCGC Liberty at Auke Bay in Juneau, AK. 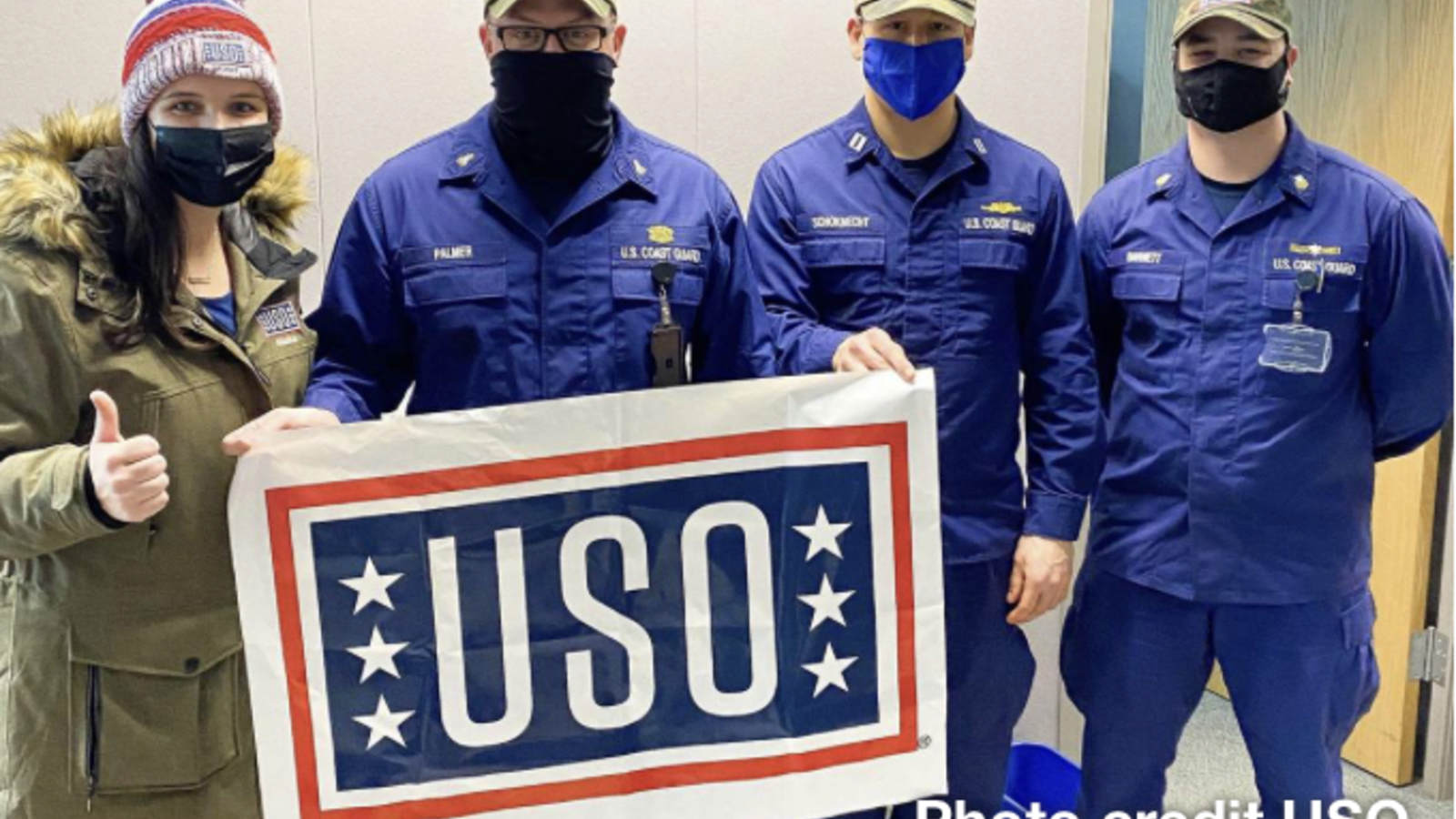 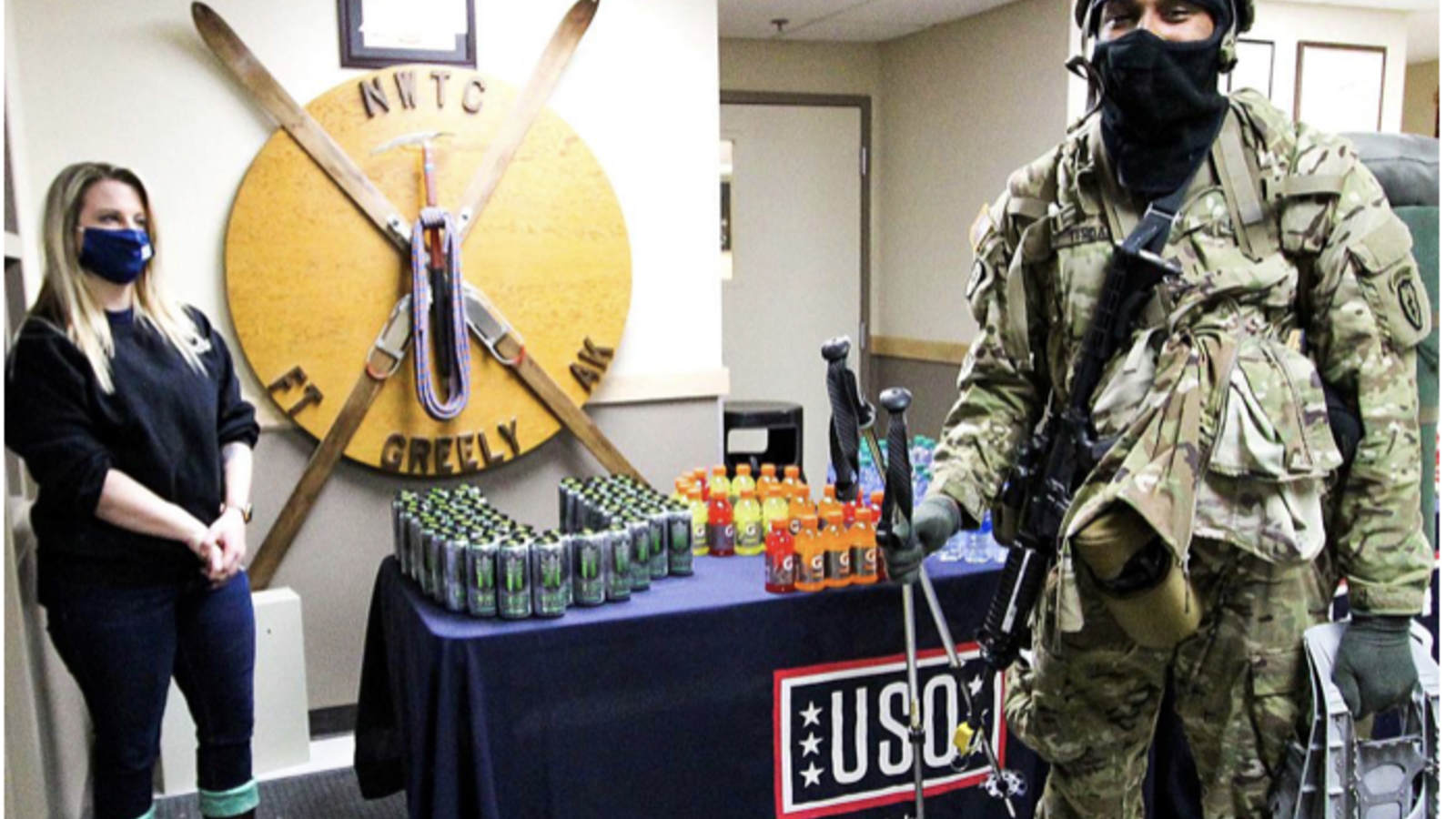 Moose, snow and fishing; these are just a few of the many things people think of when they hear “Alaska.” What most don’t think of is the large amount of service members who are stationed across the last frontier.

There are over 26,700 U.S. troops in Alaska, to include more than 22,000 Air Force, Army, Navy and Marine Corps personnel, along with 4,700 National Guard members and Reservists. With only 20% of the state being accessible by roadways, for the USO, reaching service members and military families who are stationed at more than 14 locations across Alaska can be a challenge.

Although the USO has physical locations at Joint Base Elmendorf-Richardson in Anchorage, as well as at Eielson Air Force Base and Fort Wainwright in Fairbanks, a huge part of the USO Alaska team’s mission is to provide outreach and expeditionary support to other, more remote, military locations spread across the 663,300-square-mile state (that’s more than twice the size of Texas!).

Hitting the Road to Reach U.S. Military in Remote Alaska Over the years, the USO’s expeditionary mission has evolved with the needs of the military in Alaska.

When USO locations first opened in the state, bringing hot beverages and warm snacks to airborne operation jumps and the shooting range was the main focus of USO Alaska’s expeditionary mission. But after talking with soldiers and airmen over the past few years, the team realized that there was a great need for USO support at more isolated Alaskan locations.

In 2020, the USO Alaska team set big goals for its expeditionary program – with plans to reach locations that had not yet seen the USO – but then the COVID-19 pandemic happened.

Plans were changed, but the mission continued as well as it could under COVID-19 restrictions. The USO Alaska Expeditionary Team managed to still visit outlying Coast Guard locations in a part of the state known as “The Kenai.” The team also headed up north into the interior of Alaska, where the Air Force’s Clear Air Station and the Army’s Northern Warfare Training Center are located.

With 2020 in the past, 2021 is already looking to be a groundbreaking year for USO Alaska’s Expeditionary Team.

In February 2021, USO Alaska had its first visit to Juneau, the state capital, to meet with 250 Coast Guard members. With the Alaska state capital inaccessible by roads, this was an exciting first step in the right direction for the expeditionary team.

USO Alaska Executive Director Brett Banks explained that COVID-19 lockdowns and restrictions throughout the past year have made it especially evident that USO expeditionary support is a crucial resource for the military community as USO Alaska moves forward into 2021. By traveling to remote and austere locations, the USO can deliver USO support directly to service members and military families who may be stationed at a location where a traditional brick-and-mortar USO center doesn’t exist.

“In 2021, we plan on providing an opportunity for engagement with each service member in Alaska – from Juneau to Barrow, Cordova to Dutch Harbor,” Banks said. “Our expeditionary team has their work cut out for them this year, and we are poised and ready to continue to keep service members connected to family, home and country.”

During these visits to more remote locations, the USO Alaska team speaks with the service members and military leadership to better understand what services the USO could provide to make them feel closer to home. The requests the team has received so far range from visits from USO entertainers, to large-scale USO events, to deliveries of food from favorite fast-food restaurants.

While a meal from a food chain that can be found in most American cities might seem simple, in these remote locations, these kinds of treats can boost morale and make all the difference in a service member’s day. In fact, USO Alaska has been known to send military leaders with bags of fast food for their service members stationed in remote locations, like Dutch Harbor – an Alaska fishing port only accessible by boat or plane with just eight service members assigned there.

While the Alaska terrain poses challenges unlike any other location, its USO team is ready to go the distance and make sure the USO mission is delivered to every service member in the state. USO Alaska is excited for what 2021 has in store!